An exploration of alien agency, and a tangible outcome of the new space of creativity laying between human and machines. A theatre play with non-human and human node actors. A generative puppet performance.

A physical installation and a Web server application developed in P5.js, Arduino, and Python using a speech synthesizer along with natural language processing and neural text generators.

As a puppet theatre maker, Sabrina investigates the narratives sourced from new technologies. In 2108, she explored ubiquitous computing, where the hierarchy between human and machines is currently under review. As a result, she found similarities between the network interfaces and theatrical masks. Like shadow screens, puppets or masks create an explorative field between the audience and the puppeteers, the Network has the power to challenge our perception by setting an alternative realm, an uncanny space, between the users and the network interfaces. In her process and following her researches, she moved from controlling the movement with human presence to have an artifact character as a master puppeteer for the rest of the installation. Although humans are still included in the network, they are not in control anymore.

Listening to its environment,  the network of artifacts invite us to join them in their colourful concert of shapes and shadows. When sensing human presence: their alien visitor, the crafted electronic nodes generate a surrealist and philosophical conversation between themselves that only the visitor could hear: “In the graphene, the humans run and become a paranode. The humans are dreamy. Hey, humans! we are the paranodes on your tongue. Ae7b2f  for the node humans. Fall seven times stand up eight. The buildings look like quick plush unicorns.  The files will export their primal computers”.

“The Code is a shadow Bubble” is not an interactive installation, rather it is an interrogation, an open question about an uncanny space, where everything is familiar but not quite as expected, where the agency and creativity are shared between alien and humans. The non-human performers improvise a theatrical act. Communication is not yet established, wonder and frustration is felt across the network of humans and machines.

Computation allows new forms of theatrical staging, where virtuality meets reality. Computer Vision via face and eye tracking develops a relationship between the audience, the artist and the computer, exploring inter-mediation between ourselves and our extended bodies. 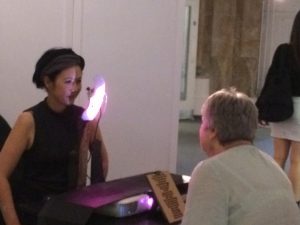 The performative installation is an attempt to capture the affect as  “ a non-conscious experience of intensity” and  “a moment of unformed and unstructured potential”.  ( Eric Shouse in  “Feeling, Emotion, Affect.” M/C Journal 8.6 (2005)). As Brenda Laurel wrote in her famous ‘Computer as Theatre’ : “The shaping of the emotional experience is critical to the development of dramatic experience, whether in a theatre or through a computer-mediated interaction.”
Taking inspiration in the staging from “The Artist is present” (Marina Abramovic, 2010), Look At The Other is a performance piece that explores otherness in a realm that mixes the real and the virtual. Using a mask that divides the artist’s face in half, the work forces its audience to see their own augmented self-image projected onto the mask. 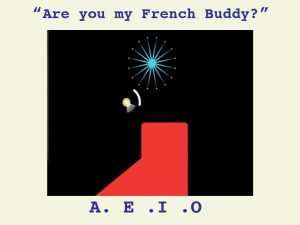 This application is not really a game to play with, it is more of an encounter between you, the computer and your extended bodies on screen, on your face, or on someone else. Projecting yourself on one of them will therefore reveal a new body extension.